Contents hide
1 Introduction:
2 Amendments over time
3 ITC outside the purview of Rule 36(4):
4 Impact of Rule 36(4) on Different Stakeholders:
5 Practical Difficulties in Implementation:
6 Validity of Rule 36(4)

Rule 36(4) has been the most discussed topic in GST parlance nowadays. Input Tax Credit which was introduced in GST as the biggest reform in Indirect Taxation was exploited by some people with malicious intent and the consequences of which is now borne by Innocent Taxpayers with the Introduction of Rule 36(4) though which various restrictions are made for availing Input Tax Credit. Let’s understand what is Rule 36(4) and what are the changes made in it over the period of time.

No input tax credit shall be availed by a registered person in respect of invoices or debit notes the details of which are required to be furnished under sub-section (1) of section 37 unless ,-

As per the said rule:

Input Tax Credit can be availed by a registered person only in respect of those invoices and debit notes:

Rule 36(4) has been amended from time to time wherein govt. initially allowed provisional Credit over and above the Credit as appearing in GSTR-2A/GSTR2B through Various notifications as follows: 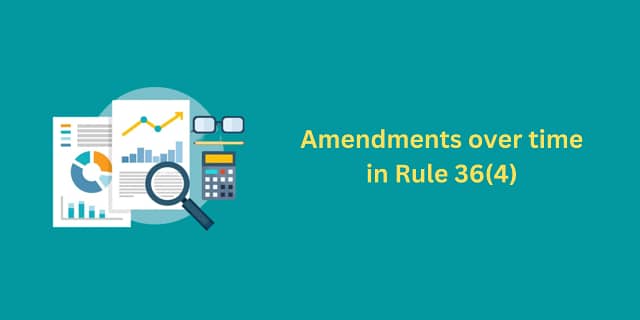 Practical Situation: Considering the amendments in above table over a period of time, though there was an option to avail provisional Credit but considering the practical difficulties, people were reluctant to take effect of Provisional Credit in their ITC working considering various ambiguities and Complexities because if in case there is Excess Claim of Credit then Interest is charged @ 24%. But since w.e.f. 01/01/2022 govt. has scrapped the Provisional Credit and now only the Credit as reflecting in GSTR-2B can be claimed.

Impact of Rule 36(4) on Different Stakeholders:

As we know that everything comes with Pros and Cons of its own on different set of people.         In our case the interested stakeholders are Govt. and Taxpayers. Let’s try to understand the Impact of Rule 36(4) on both the parties:

Considering the above issues now Recipient will have to take follow ups from the supplier on regular basis which could end up in dispute and affect their business relations with Supplier despite the fact that tax may have been deposited to govt. by the supplier but ITC could not be availed by Recipient.

As per Section 16, following basic conditions need to be satisfied:

Though filing of returns is in hand of Recipient but whether tax is paid by Supplier is not in his hands. It is duty of Supplier to take tax from Recipient and deposit it with govt. and that is why it is called Indirect Tax. If the supplier does not deposit tax to the govt. even after collecting the tax from the recipients then ideally Supplier should be penalised and not Innocent Recipients who have duly paid the taxes to the Supplier.

From the above analysis, it can be said that Rule 36(4) is valid for the govt. but for the Innocent Taxpayers it seems to be very harsh and Stringent.

It is righty said that the Input Tax Credit which was considered as a Blessing for Businesses at the time of Introduction of GST is now considered as Curse with continuous changes being made by Govt. GST law is becoming more and more complex by passage of time, as compared to what was expected to be Good and Simple Tax.

Are you Looking for GST Refund Service? Mygstrefund.com offers GST Refund on business, exports and many more if your GST application is rejected. Get in touch with us today.

Stay Up to Date With The Latest News & Updates